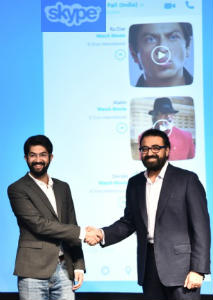 Skype has partnered with Indian studios Yash Raj Films and Eros Now, the on-demand entertainment platform of Eros International, to develop custom Mojis for Skype users. In addition to the existing worldwide Mojis content, now users can react to Skype messages with clips from their favorite Bollywood movies, such as DilwaleDulhania Le Jayenge, Ra one, Dhoom 2 and 3, Tanu Weds Manu Returns and Devdas; and actors such as Shah Rukh Khan, Amitabh Bachchan, Aishwarya RaiBachchan, Anushka Sharma and Ranveer Singh.

Additionally, Skype has also created new emoticons highlighting some of the food, gestures and daily expressions honoring the Indian culture Bollywood stems from.

“We’re hugely excited about our partnership with Yash Raj Films and Eros International studios to bring more exciting content to our users. Our goal is to provide the best possible messaging experience on Skype, and tapping into India’s extremely active and vibrant film culture is a perfect way to do that,” said Gurdeep Pall, Corporate Vice President – Skype.

Both Bollywood Mojis and emoticons are available worldwide in the features tab of the emoticon picker on Skype for Windows desktop, Mac, iOS, Android and Skype for Web.

Viber ties up with Buzzfeed for Public Chat

Just Corseca has announced the launch of the Stallion neckband for today’s advancing generation. Users can directly click the photographs by

Many new and interesting use cases of CCTV cameras have come to the forefront in the last couple of years.