These days social Media is filled with creative content, where people try to showcase their thoughts and idea in public. Most of the people use smartphones to create such creative content so that they can easily optimize it by using simple applications available on their respective stores i.e. App Store and Play Store.

LIKE – Magic Video Maker & Community is once such application available on both the stores using which you can easily make creative content by editing your video, adding effects and sharing the content on the social media platform. LIKE Application was launched by BIGO TECHNOLOGY PTE. LTD and available in 23 languages including Hindi, Tamil, Marathi, Telugu, Gujarati, Bengali, Kannada, Malayalam and Punjabi.  The user base of LIKE Application is over 100 million users globally in over 200 countries.

Interestingly, when we visited the Google play store, we found the App topping the charts, even better thanTikTok. 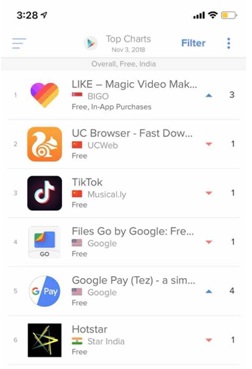 LIKE App is one of the best application used by smartphone users across the globe to create and edit the videos. If you are new to this app then this would be a step-by-step guide using which you can operate this application on your smartphone.

The download size of the application is around 54 MB on Play Store and requires less RAM while operating on your smartphone.

Step 1: Firstly, you need to download the application from Google Play Store or iOS Store.

Step 2:  Once the Application is installed, Launch the App by a tap on the open button or you can open it from the app drawer.

Step 3: Now, you need to select the language and click on confirm, you will be redirected to the main page of the application.

Step 4: On the Top Left, you will find the profile icon where you need to sign-up and create your profile. The sign-up process is simple where you can either log in using a mobile number or you can use Google/Facebook/Instagram Accounts as Sign Up.

When you are on the main page of the application click on the video icon on the center of the screen and click on allow to use the camera, mic, and gallery to store the created video. The camera icon in the centre, circled in multiple colours will allow you to shoot pictures and videos. As soon as you click on the camera icon, the camera screen will open up to shoot videos. This is where you can scroll through the exhaustive library of LIKE stickers and effects and can also use the famous Magic feature options to create some great videos. 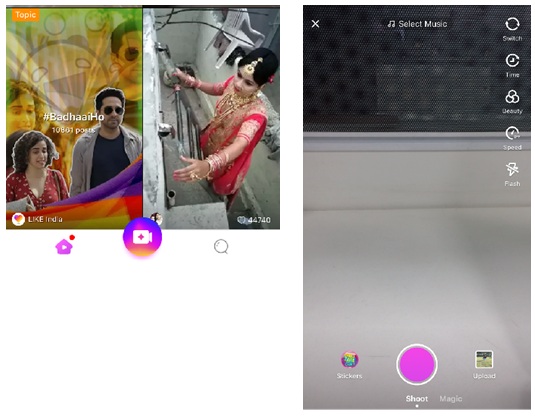 The LIKE App has two modules where you can edit the existing video by uploading on the LIKE App. The other is you can record a live video of about 15Sec ~ 1Min and use the LIKE application’s magic features to make the video more interesting to your audience.

The interface of the application is easily understandable for any user who has a knowledge of using a basic smartphone. The basic features of the application are stickers, Speed, time and beauty adjustment.  When you click on stickers you will find two options, Stickers and Magic Music, where you can download any of the stickers and use it for the video you record.  Once the video is recorded you will find the video editing options i.e., Touch Magic which helps in adding effects to the Video, Effect Mix which helps in motion adjustment and Bomb Effect which helps in adding explosion feature in the video.

We found the latest stickers around Diwali and it definitely gave us the festive feeling. It’s must try if you want to have some fun.

Apply these options as per your requirement and click on ‘Tik’ option on the top right to save and publish the Video.  You can describe the video, apply hashtags and can publish on your LIKE application timeline.  This is the basic version of creating and editing the Video on LIKE Application.

One of the new stickers that LIKE has recently introduced are ‘TeleKinesis’ that gives you psychic abilities to move, destroy or slow things down with a show of your palm.

This application has got some advanced features known as “Magic” features which are Music Magic, 4D Magic, Shaping Music and Superpower making the LIKE application resemble as its mean.

Music Magic is the feature which can be directly opened from the sticker region, where you need to select any of the song, download and apply that in the background. Now you can make the video where the background music would be the song that you have chosen.

We Tried multiple effects and they all have something different to offer. The creativity through these is unlimited.

4D Magic feature on the LIKE App helps in creating a 4D video where AI-powered body movement tracking paired with image editing and special effects processing that allows for interchangeable, dynamic backgrounds that can accommodate multiple people in a video. 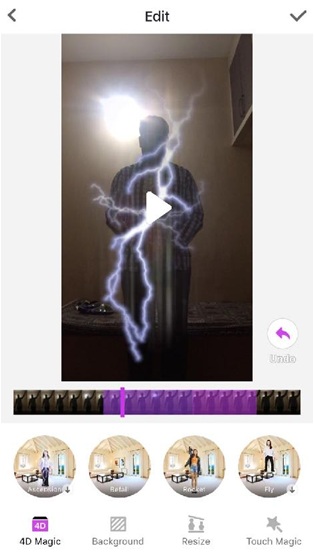 Step 1: Firstly, you need to set up your device on a table so that your phone doesn’t move.

Step 2: Tap the shoot button and move out of camera range to capture the background.

Step 3: Now move into the camera and shoot yourself. The Video is prepared and moved to the video editor section where you can further add the additional effect i.e. 4D magic by selecting your required theme and complete your video.

Dialogue Acting is the basic feature of the app where you can choose any movie dialogue and do the lip sync accordingly and record your video, which can be further customized and optimized. 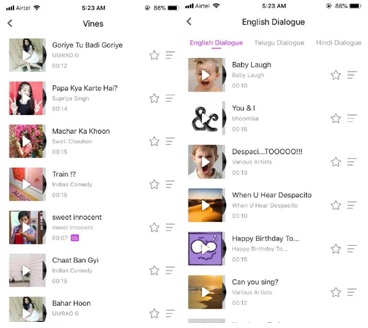 Step 1: Open the Like Application and tap on Magic.

Step 2: Now select the Dialogue option and choose the dialogue which you want to use.

Step 3: Further, record the video with lip sync to the dialogue and customize it with the basic editing options and publish your video.

This is the latest feature on the LIKE App where augmented reality effect based on skeleton tracking and classification technology, empowering creators to add supernatural effects that match body movement.

The new feature allows user to manipulate the natural elements around them and control natural phenomena. The feature offers a series of advanced, breathtaking AR effects at a level never before incorporated into a commercial application.

Step 1: Open the LIKE App and tap on magic. Further, you need to select Super Power and place your phone on the table and click the shoot button.

Note: You need to make sure that you are fit in the prescribed region on the screen which helps in creating an interesting Superpower effect.

Step 2: Now select the superpower that you want to use and click on the Download button and tap on apply and start making the video.

Step 3: Now stand in the outlined area and act like in the demo of the Theme which you used. Once the Video is recorded, tap on the tick button on the top right and publish the video.

Note: LIKE App does support Trim and Merge, Rotate, adjust Ratio and playback speed of any video that you want to edit.

Overall the LIKE Application is a wonderful video editing application that can help in creating creative Videos as per the user requirement. The best feature about the LIKE application is that it acts according to the trend where it develops their own stickers which make them look relevant. People across the Globe can use this application to make an interesting video for the upcoming festival Diwali and wish their near and dear.

P.S: LIKE App is running a Diwali Campaign called #LIKE20Million with great give aways. Watch out for a post from LIKE on your timeline. Make sure you have signed up to earn prizes. 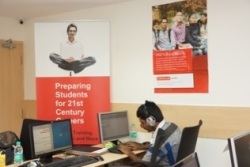 Breaking News Budget Who in Charge

One of the ever more popular topics in information technology (IT) are container systems, such as Kubernetes. Increasingly, decision-makers at

Prevention is better than cure; Ramp up your recovery before disaster strikes