New Delhi, India, December 17, 2015: Letv, the Chinese internet and technology giant, recently posted a sales record during the 12/12 online shopping spree in China. The cross-platform sales of Letv ecosystem-empowered products reached US$226 million (approximately RMB 1.4 billion). 282,000 sets of SuperTVs amounting to a total worth of RMB 790 million were sold on JD.com, making Letv a dual smart TV sales champion on the platform. Le Superphones also stood out with 433,000 units sold, posting RMB 530 million in sales revenue. Le 1s became the best-selling new product across the Internet for its amazing sales performance in one day.

Earlier Jia Yueting, chairman and CEO of Letv, revealed that Letv is planning to achieve the goal of selling 6 million sets of Super TVs in 2016, aiming to become one of the top three smart TV brands. Proof of Super TV’s soaring popularity among users is that it is the only smart TV brand to achieve RMB 100 million sales record on JD.com in just 20 minutes! With an ever-growing sales volume, Letv has firmly established itself as a dominant player in the TV industry in China.

The sale of Le 1s has continuously soared since its launch. Le 1s, under the sales model of “Spot supply + Pre-order”, boasted over 550,000 units of combined sales volume on both LeMall and JD.com, just after an hour of its availability for buying online.

Letv’s strong sales momentum at its 919 Le Fans festival and the 11th November and 12th December online shopping sprees highlight the tremendous success of ecosystem-based economy model established by Letv. Industry experts opine the success behind low-profit eco promotion model has done wonders for Letv solely due to the open-ended closed-loop Letvecosystem featuring “platform + content + device + application”. The robust interconnected sub-ecosystem of Letv has enabled it to keep up synergies by breaking the boundaries of different business sectors and providing services of all-new values to users.

As part of its expansion plans in APAC, Letv is reportedly foraying into the India market and is all set to achieve similar success in India. It has already been setting records in India by becoming one of the fastest growing Facebook fan pages in the smart phone space.  It is also rumoured that Letv is planning to bring its complete ecosystem to give Indian users a six screen experience. 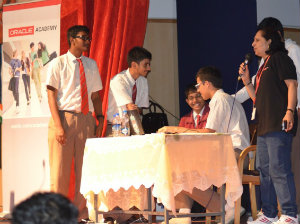 Oracle Academy organises “Code Together” to encourage coding among students