Technology is constantly evolving, and one of the most visible signs of this in 2020 is the advent of widespread 5G mobile networks. These networks provide higher speeds and support for more devices, making it possible for enterprises to deploy Internet of Things (IoT) devices in environments where it would previously have been impossible.

However, with 5G comes security concerns. As business traffic moves onto mobile networks, organizations lose visibility and security. A software-defined wide area network (SD-WAN) solution provides an organization with the ability to secure these new devices without sacrificing network performance.

Implications of the Growth of 5G Mobile Networks

In 2020, 5G mobile networks are becoming commonplace. The new 5G technology offers a number of advantages compared to existing mobile networks, including improved network performance and the ability to support many more devices. These advantages are likely to drive the increased adoption of IoT and mobile devices for business applications.

One of the primary differences between 5G networks and existing mobile networks is the improved network speed and latency provided by 5G mobile networks. Traditional 4G and LTE networks have a top download speed of approximately 15 Mbps, which is several times lower than the theoretical top download speeds of 10 Gbps of 5G or even the more realistic 50 Mbps minimum speeds that can be expected from the new technology.

In addition to increased download speeds, 5G networks also offer decreased latency compared to existing mobile network infrastructure. 4G and LTE networks have an average latency of 50 ms, which is five times higher than the maximum expected 10 ms latency of 5G and fifty times worse than the best theoretical latency of 1 ms.

This increase in network speeds and decrease in latency make 5G networks a viable alternative for IoT and mobile devices used for business purposes. In many deployment environments, mobile network speeds and latency were the primary factors inhibiting its use for IoT devices, and the geographic flexibility of 5G, compared to broadband Internet connectivity, is a significant advantage.

With existing mobile networks, the maximum number of devices that a base station can support in a certain geographic area is a major constraint. This is especially evident during large gatherings, such as major sports events, where the density of mobile devices using the network means that service is degraded or unavailable for many users.

5G technology provides a solution to this problem, with the ability to support a much higher concentration of devices connected to mobile networks. Compared to 4G and LTE, 5G mobile networks can handle up to 100 times more connected devices within the same geographic area.

This ability to support a greater density of devices is another major driver for the increased use of mobile networks to support enterprise IoT and mobile device usage. If mobile networks can be trusted to provide reliable, high-performance network connectivity, then they may be used as the primary means of networking IoT devices deployed to monitor and manage remote business sites and manufacturing systems.

The benefits provided by 5G mobile networks make them an appealing choice to many organizations. However, the widespread adoption of 5G for carrying business traffic creates a number of security concerns for businesses. One of the major impacts of enterprise adoption of 5G networks is a lack of visibility and security for business traffic. In many contexts, the traffic flowing from devices that would be connected to these mobile networks is directed toward cloud-based systems.

As a result, this business traffic will not pass through an organization’s existing security deployment at any point during its journey. Many organizations have adopted a perimeter-focused approach to security, where their cybersecurity monitoring and threat detection solutions are deployed at the border of the corporate local area network (LAN). While this approach is effective when at least one endpoint of every network connection is within the enterprise LAN, this assumption is no longer valid with the growth of enterprise use of the cloud, IoT systems, and mobile devices.

In many cases, an organization’s current security solutions cannot be deployed at these new endpoints, due to a lack of control of the underlying infrastructure or inadequate memory and processing power on-device. Securing these devices requires a different approach to routing, monitoring, and securing business traffic.

Cloud-based SD-WAN provides a solution to this problem by moving network routing and security to the cloud. A geographically distributed collection of cloud-based points of presence (PoPs) provide convenient entrances to the enterprise WAN with integrated security, such as a next-generation firewall (NGFW) and secure web gateway (SWG). These PoPs are connected by a set of dedicated Tier-1 links, providing high-performance and reliable connectivity across the corporate WAN.

In the age of 5G, when mobile networks are faster than ever before, organizations and employees have a strong incentive to use mobile networks for business traffic rather than the enterprise WAN. With cloud-based SD-WAN, it is possible to meet an organization’s visibility and security needs without sacrificing network performance. 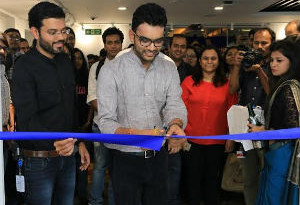 LinkedIn has a new address in Bengaluru