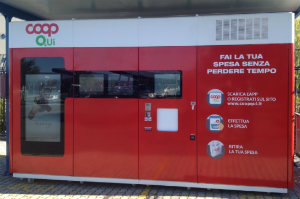 New Delhi, India, February 04, 2015: STMicroelectronics, a global semiconductor leader serving customers across the spectrum of electronics applications, announced today that its employees working in Catania (Sicily, Italy) can now buy a wide range of products for their families’ needs online and pick them up on their way home at Coop Qui, the world’s first fully automated on-site smart store operated by WIB Machine for COOP, the Italian retail-chain leader.

The Coop Qui store combines physical and digital sales channels, provided by WIB, a Sicilian start-up.Its web-based approach enables customers to make purchases on site as well as remotely from their PCs or mobile devices, choosing from a catalogue that includes groceries, food, toiletries, and products for home and personal care. WIB’s patented technology uniquely enables automated picking of shopping-list orders of multiple items regardless of those items’ shape, weight, and fragility. Coop Qui is designed to help ST Catania employees, who want fresh food and top-quality goods, make and collect their purchases at the end of their working shift 24/7, directly from the unmanned WIB automated store located in their parking lot.

“The distribution method made available by Coop Qui simplifies the lives of people who refuse to sacrifice quality—even without the time to shop every day. Food offered by Coop Qui consists mainly of COOP-branded products and fresh Sicilian produce. We fully support the smart idea of WIB that has already managed to receive accolades from all over the world, and are grateful to STMicroelectronics, a center of technological excellence in Catania and innovation leader, for being the world’s first to open up to this unique project,” explained Lucio Rossetto, CEO of COOP Sicilia.  “COOP anticipates that this model will be popular with consumers and can be replicated in different locations in the city of Catania and worldwide.”

WIB was created in 2013 from an idea of its founder and CEO, Nino Lo Iacono. After completing a degree in Mechatronics Engineering at the Polytechnic of Turin and a couple of years at FIAT Research Center, Lo Iacono decided to start his own business in Sicily, the region where he grew up and found support from ARCA, the business incubator of the University of Palermo.

WIB Machines represent an optimal solution to setting up an actual store, with limited investment and low operating costs.

“We have quickly reached the market with a high-tech solution with the strong cooperation of COOP and STMicroelectronics, who see in WIB a way to help their employees and the community,” said Lo Iacono. “Valuable feedback from among ST employees has already provided useful suggestions to improve the quality of the service.”

“ST welcomed the invitation from WIB and COOP to provide convenience to its employees via a machine located on site and accessible at the end of employees’ work-shift. Our 4,000 highly educated local employees, with an average age of 40 years and a large percentage with families, working in shifts around the clock, are particularly well suited to the benefits that COOP and WIB have introduced,” said Francesco Caizzone, ST Catania Site General Manager. “ST recognizes its role in contributing to the success of local companies through coaching and providing the opportunity to promote brilliant business ideas and WIB is leveraging advanced technology to improve employees’ lives for a better tomorrow.”

After an initial test phase, COOP will consider the deployment of additional WIB technology-based Coop Qui stores at other ST sites in Italy and at other leading companies’ premises.

Coop is the Italian retail-chain leader (a market share of 19.1%, 12 billion 724 thousand euro as sales volume, 1.200 sales facilities, 54,700 employees) and its network presence spreads from the North to the South of the country. But Coop is also a group of ventures that belongs to more than 8 million associates with a 3.4% growth percentage compared with 2012. The consumers cooperative companies managed to create in Italy a solid and widespread network capable of combining market logics and social commitment.

Coop Sicilia was born in October 2014 from other Coop different experiences in the region. Its mission is to spread and promote Coop philosophy, values and culture in Sicilian area, contributing to the region’s socioeconomic development, in the certainty that there isn’t true development without solidarity and legality: careful and clear employees selection, suppliers chosen on the basis of strict standards of quality and legality, a steady relationship with the area through social and cultural events. A network composed of 7 superstores Ipercoop-branded and 15 supermarkets Coop-branded that cover a big amount of regional area. Not considering satellite activities, Coop Sicilia has 1,184 employees and a management composed by Sicilian men and women.

AVITA has launched its latest laptop, LIBER V14, exclusively on Flipkart at INR 62,990 for its Big Billion Day Sale.